Y'know what? I expect most of you are going to ignore all of this week's legacy reissues in favor of the finally-released Windjammers 2, and I can't say I blame you. 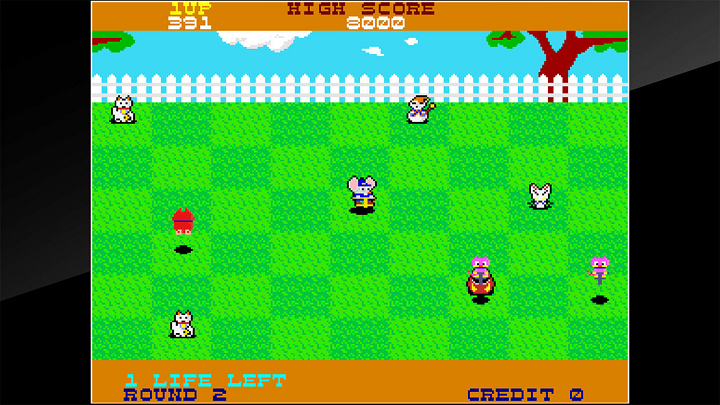 What's this? The first and only completely original arcade sequel to Namco's beloved mouse-and-cat maze game Mappy, originally distributed in Japanese arcades by Namco in 1986, with the only official home version prior to this release being an emulated reissue on the Japanese Wii Virtual Console in 2009. Much like the original adapted the maze game format into the side-view perspective, Hopping Mappy is something of a three-quarter-view take on the same concepts; Mappy's goal continues to involve collecting stolen goods while dodging or occasionally incapacitating the criminal Meowkies, but this time Mappy's hopping around each scrolling play field in four directions, with the occasional auto-scrolling bonus stage for added challenge.

Why should I care? You have a fondness for Mappy as a character and, like many other people, had no idea that this game even existed, or you just want to hear more catchy Nobuyuki Ohnogi ditties (many of which have a decidedly '50s rock vibe this time around).

Useless fact: Hopping Mappy was developed for a relatively new and advanced arcade board called the System 86, but much of the board's power went unused: the music entirely eschews the YM2151 FM chip for the more modest WSG audio of older games, and one of the board's two MC6809 CPUs essentially went unused.

What's this? A "bullet-hell training app" based on the arcade shooting game DoDonPachi Dai-Ou-Jou, originally developed and released by Cave for Japanese feature phones in 2006 and reissued on Switch in Japan several months ago; this app recreates several bosses from the original arcade game (as well as the "double Hibachi" fight from the PS2 port) and challenges the player to repeatedly clear them, gradually upping the difficulty in an attempt to grade the player on their danmaku proficiency.

Why should I care? You can accept that there are now two DOJ-derivatives games on Steam that aren't actually DOJ proper, hard as that may be to swallow. I mean, that's hardly G-MODE's fault, is it?

What's this? Rare's beloved bear-and-bird 3D collectathon, developed and released for the Nintendo 64 during their tenure as a Nintendo-owned studio and later ported to the Xbox 360 and included in the Xbox One compilation, Rare Replay; this game broadened the template set by Mario 64 via the adoption of a tandem duo player-character, a wider variety of gimmicks and adventure-esque elements and a lot of talkative and quite snarky characters.

Why should I care? Whatever stereotypes or misconceptions you might have about Rare's 3D collectathon output, most of them didn't really manifest until later, much less interesting games — if you've ever enjoyed a sandbox platformer and have any affinity whatsoever for Rare's anti-character miasma, you won't struggle to enjoy yourself with this one.

Helpful tip: The Xbox version of Banjo-Kazooie adds widescreen and HD support, but the framerate doesn't go above 30FPS so it's not necessarily going to look or handle a whole lot better than this emulated Switch version. In terms of content, the Xbox version remembers the individual collectables you've already collected and lets you grab the full set across multiple runs of a stage, rather than expecting you to get them all in a single run, which some might consider an improvement; it also offers a facsimile of the legendary "Stop'n Swap" feature that was dropped from the N64 version due to hardware concerns about physically swapping cartridges mid-game, but I honestly can't remember how it works in the Xbox versions or what it does, so I'm going to go ahead and say you won't be missing much without it.

Revealed several months ago in Japan and set to release in March, the Taito Egret II Mini (more on that here, for those who missed it) has finally been announced for international release via regular Taito partner Strictly Limited Games: sister company ININ Games is handling sales of the standard package and the individual external controllers (an arcade stick, a gamepad-style controller and an "expansion set" containing a trackball/spinner controller and exclusive additional games, accessible via SD card), whereas SLG proper is handling the deluxe bundles, which include a Mini + Expansion Set bundle and an even bigger bundle with the additiona gamepad and more. These international releases haven't been given an exact release date, and given SLG's recent track record, the wait may end up being much longer than initial forecasts, but I can't imagine these units will hang around for long. They're also substantially pricier than the Japanese versions, but the collectors' packages do include some small exclusive items, and the international units exclusively use blue buttons instead of purple, so... well, maybe that's justification enough to somebody. (On a related note, Taito's currently polling fans on the games they'd like to see offered via future SD card expansions, and they're not necessarily limiting nominations to Taito-made or -owned games, either, so give that a look if you're keen.) 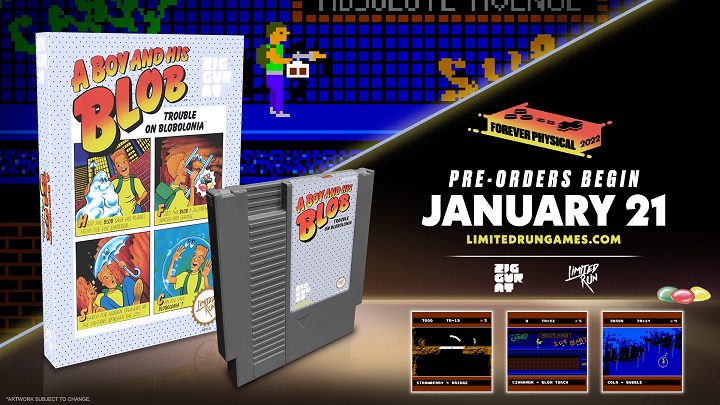 Limited Run Games is bringing David Crane's original cult puzzle-adventure NES game out of the vault for the first time since the Wii Virtual Console days, and what's more, they're bringing the little-played Game Boy sequel out with it; you can grab either game in both standard or collectors variants, the latter of which include bonus items like soundtracks, stamped foil boxes and, in the case of the NES game, an LRG-branded dust sleeve. 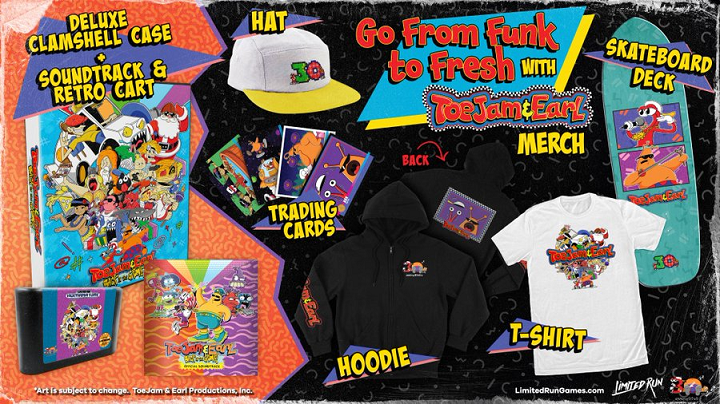 Shirts! Hoodies! Hats! Quasi-roguelike tabletop card games! Trading cards! Soundtracks that come with fake carts, but not actual game carts because Sega owns all the original game code & assets! Skateboard decks! For the next month or so, LRG's got the hookup.

YELL (POLITELY) AT THIS PERIPHERAL MANUFACTURER 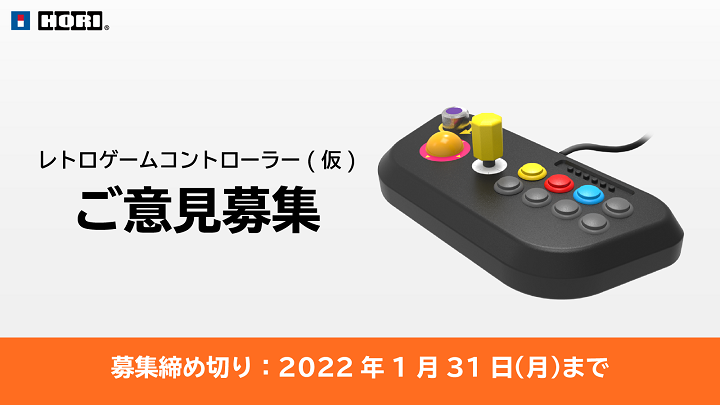 The ever-reliable third-party controller manufacturer HORI has long bandied about the idea of making specialized controllers in collaboration with the Arcade Archives series, and those long-held plans have moved beyond mere idle discussions: they've concepted and prototyped several different permutations of a retro game controller line that'd handle input methods including a rotary "loop lever" joystick (Ikari Warriors!), a trackball and a spinner/paddle, which include both all-in-one options as per the above picture but also smaller individual discrete controllers and even a modular units with Switch-style interchangeable side panels, all of which can be seen on the official proposal page. As of now, HORI hasn't decided whether they will or won't be moving ahead with any of these ideas as commercial products, so they're currently soliciting feedback to determine whether there's demand for any or all of these controller configurations — if you'd like to show your support and push them in any particular direction, email hori-event-info@hori.jp with "レトロゲームコントローラー(仮) 商品意見" in the subject header and let them know precisely what you want. (In all honesty, I have no idea if they're going to acknowledge or response to English messages, but at the very least, it'll establish that there's international demand for specialized controllers like this one.)