For those who missed it, know that this week's rather substantial roundup was buoyed by a multitude of Nintendo Direct announcements which, in no particular order, include: a Chrono Cross remaster, remakes of Klonoa 1 & 2, a localized "2DHD" remake of Square's cult Super Famicom RPG Live-A-Live, Front Mission 1 & 2 remakes and a Switch port of the Wii version of Star Wars: The Force Unleashed, of all games, as well as revivals of Wii-era games like Mario Strikers and Wii Sports and an obscene amount of remade classic tracks for Mario Kart 8. Not announced: Mother 3! 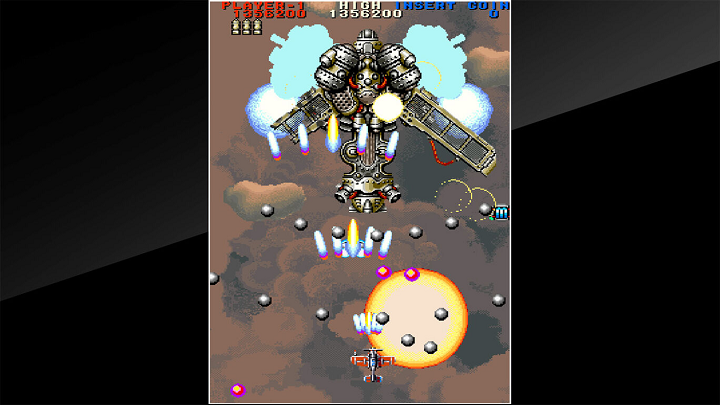 What's this? An in-name-only sequel to NMK's military-themed vertically-scrolling shooting game, originally developed and distributed in arcades by NMK in 1993; whereas the original Thunder Dragon was a fairly run-of-the-mill Raiden-like, the sequel sets itself apart via an involved scoring system that involves constant speed-killing of enemy waves and multiple types of scoring items.

Why should I care? In recent years, Thunder Dragon 2 has found a devoted audience among shooting game aficionados the world over for its manic caravan-esque style, well-crafted pixel art and catchy tunes from now-legendary shooting game composer Manabu Namiki — this is perhaps NMK's most beloved shooting game, and one of the deeper score-play games available via Arcade Archives. (It also features a quite chatty and nigh-incomprehensible announcer voice, if that's your thing.)

Helpful tip: Here are three simple scoring tips that may not be immediately obvious to complete newcomers: firstly, the 2P ship is very different to the 1P ship and far and away superior for scoring; secondly, the letters that appear at the beginning of each stage can be destroyed and will guarantee substantial bonuses if you can destroy them all; and thirdly, the max bomb bonus is conferred upon collecting your final bomb, not exceeding your total, which means you can and should spend and re-collect your final bomb as often as you can manage.

What're these? Footnotes on YIIK's wikipedia page. (Also included is a "SP" save-state for Super Metroid, which places Samus at the end of the game with all her upgrades.)

Why should I care? I don't know, should you? Wouldn't you rather whine to nobody in particular about how Nintendo's wasting resources on trash nobody asked for instead of, I don't know, Dick Vitale's "Awesome, Baby!" College Hoops?

Helpful tip: The Sanctuary Guardian theme is the best piece of music in Earthbound, in case you weren't aware.

What're these? SSF-emulated reissues of three arcade shooting games originally developed and released for the Sega Saturn by the Japanese studio Success and released on PS4 and Switch late last year: the peculiar horizontal game Cotton 2, the more traditional revision Cotton Boomerang and the somewhat obscure vertical tank shooter Guardian Force, produced by frequent legacy publisher City Connection. Each game offers save states, rewind and slo-mo, various screen settings and online leaderboards; the menus and front-end can be displayed in English but the games themselves remain untranslated. These versions also include additional slightly reduced input latency and some other quality-of-life feature, which should be available for the existing console versions via update.

Why should I care? The recent console versions were virtually rendered unplayable due to an excess of input lag, so one might optimistically hope that the combination of the slight lag reduction and the potential power of one's PC might drag them into the realm of playability... but I have my doubts.

What's this? The entire Kingdom Hearts saga, more or less — the HD 1.5+2.5 ReMIX and HD 2.8 Final Chapter Prologue compilations, plus the new Kingdom Hearts III & DLC — running on Switch via the infinite power of cloud computing.

Why should I care? You shouldn't, unless you're content to throw away money on products that straight-up do not function.

Pajama Sam: No Need to Hide When It's Dark Outside, Pajama Sam 2: Thunder and Lightning Aren't so Frightening, Putt-Putt Saves the Zoo  & Spy Fox in "Dry Cereal" 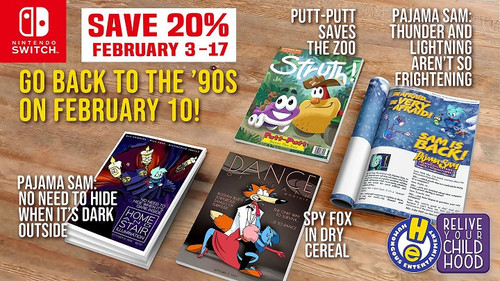 What're these? Four more Switch ports of '90s-era PC adventure games made by the renowned edutainment studio Humongous Entertainment, following from the two that kicked things off last month; these are essentially the original games running in the ScummVM emulator with very little by way of embellishment.

Why should I care? Last month, I questioned whether the typical Retronauts reader was appropriately situated to feel any sort of nostalgia for these games, or if they were even familiar with them beyond their ties to LucasArts alum like Ron Gilbert, and that question remains unanswered; I'm willing to take it on faith that these games might still compel their target audience, but I really have no clue.

What's this? A KEX Engine remaster of Lobotomy Software's cult exploratory FPS Powerslave (or Exhumed, depending on your region), originally released for the Sega Saturn in 1996 and converted to the Sony PlayStation in 1997; in addition to modern lighting/post-processing effects and support for ultra-HD resolutions and interpolated 120FPS framerate, this version cherry-picks and merges contents from both of the similar-but-not-identical console versions, as is Night Dive's wont. (My understanding is that it's primarily based on the PS version, with content from the Saturn version sprinkled in where deemed appropriate.)

Why should I care? Saturn maniacs in particular have long championed this game, not only for its technical prowess but for its inter-connected, ability-driven game structure which not only offered a credible alternative to the dominant PC FPS design of its day but, alongside games like Turok 2, paved the way for the likes of Metroid Prime — put simply, this is a classic-era FPS that offers something for PC and console players alike, and one that most players have been waiting decades to experience.

Helpful tip: The original PC version of Powerslave, which is available on certain digital storefronts with the subtitle "Classic DOS Edition", shares many assets with the console versions but is otherwise a completely different game; this versions was produced using the BUILD Engine of Duke Nukem 3D fame and is an entirely linear (and, frankly, not particularly interesting or ambitious) game.

What's this? Vivid Image's incredibly authentically samurai-themed side-view action game, originally released for the Sega Mega Drive and Amiga in 1994 as a follow-up to the surprisingly successful Amiga/SNES title First Samurai; as with most Piko Interactive reissues, it's an emulator folder with a Mega Drive ROM in it, nothing more and nothing less.

Why should I care? I can say with all sincerity that Second Samurai is one of the very best Mega Drive action games of its kind to come out of Europe, and one you will enjoy entirely separately from the moment-to-moment ridiculousness of the setting. (It also sports two-player co-op, which was still fairly uncommon for games of this type and vintage.)

Useless fact: You might have noticed a Bleem! credit on the Steam page — that's just a brand name that Piko now controls, they didn't slap this game into a PS emulator or whatever.

What's this? A crowdfunded collection containing three emulated PC Engine CD games in the seminal side-view anime girl action series, Valis, originally produced by Wolf Team and Nihon Telenet for a variety of Japanese microcomputers and home consoles and currently owned by Edia; these three games feature offer save states, rewind and button configs alongside a cutscene viewer, art/manual gallery and sound test, with the games' cutscenes and certain visual material subtitled/translated into English. (These games are available individually in Japan, but the international versions are currently only available as a collection.)

Why should I care? The Valis series is, by and large, a franchise that coasted on being one of the very first games to offer the entirely axiomatic combination of side-scrolling action and cute anime girls and one that took several entries to finally attain some degree of mechanical competency, so for as meagre as this collection may seem — there's a Valis IV for PC Engine, too, as well as the original microcomputer games and various other console conversions — it really does serve up the best this series has to offer.

Helpful tip: Valis I for PC Engine is a remake that was produced after Valis II and III, so the canonical chronology doesn't match up to their actual chronology and as such, the "later" games aren't going to be as polished as the "first" one.

The unlikely "roguevania" revival of Konami's long-forgotten Famicom horror-action title GetsuFumaDen has finally left Early Access and made its way to consoles, and if you choose to buy the digital deluxe version you'll also receive, among other things, an M2-emulated version of the Famicom game — they've only translated the front-end and not the actual game, mind, but they did add a cute feature to the Switch version that lets you tilt the system to emulate the lenticular image seen on the original Famicom box, which almost justifies the $35 asking price.