I'm sure some of you might be wondering: whatever happened with the A500 Mini, the Amiga's answer to the recent console-based replica hardware craze? Wasn't it supposed to be out sometime soon? The answer to that question, dear readers, is yes, but the many release dates offered in recent months have been very shaky and region-specific and not at all consistent from person to person... which is a longer way of saying "I keep being told mine isn't ready, but everyone else seems to be getting theirs", so look forward to a belated write-up next week, I guess.

Valkyrie no Densetsu (The Legend of Valkyrie)

What's this? The second and most popular entry in Namco's fantasy-themed overhead action-RPG Valkyrie series, originally released in Japanese arcades in 1989 and converted for PC Engine the following year, with an internationally-released port produced as part of the Namco Museum 5 collection for PlayStation in the late '90s; playing as the titular Valkyrie or her lizard-dude companion Xandra, one or two players must shoot, slash and/or platform through each of the relatively vast environments in order to defeat enemies, earn currency to buy new equipment and discover hidden items and techniques on their quest to retrieve a wish-granting golden seed and wrestle their world from the brink of collapse.

Why should I care? You have a particular affinity for the "arcade-action-with-shop-systems" subgenre popularized internationally by the likes of Wonder Boy in Monster Land and Black Tiger and want to try one of the very best entries in that short-lived field, or you'd just like to finally try a Namco classic whose female protagonist lighter anime-inspired aesthetic kept it from receiving the contemporary global release it sorely deserved (with one major caveat, detailed below).

Important note: This reissue presents the original Japanese ROM as-is with no effort to translate any of the game's text, internally or via the manual; this wouldn't be a massive deal for many arcade games, but Valkyrie not only contains a relatively large amount of narrative and NPC babble but also important text like item descriptions and puzzles that require Japanese language knowledge, so you may need to find an external guide in order to clear the game.

What's this? Camelot's first Super Mario-themed golf game, originally released for the Nintendo 64 in 1999 and later reissued for both the Wii and Wii U via the Virtual Console service; it's a 3D golf game with Super Mario series characters, and if you were expecting anything fundamentally different, prepare to be surprised.

Why should I care? You jumped aboard the series with the recent Super Rush, or you simply haven't revisited the older titles in a while, and you'd like to experience this take on golf at its least casual and least gimmicky.

Helpful tip: The original N64 game featured Transfer Pak compatibility that allowed players to transfer certain original, customizable characters from the GBC version to the N64 version stats and all; that functionality isn't present here, and without anything to transfer characters from, it wouldn't be particularly useful anyhow.

What's this? A ten-game collection of classic and obscure Taito arcade games, originally released between 1981 and 1987; this collection was produced in collaboration with Arcade Archives producers Hamster and essentially offers a slightly stripped-back version of the Arcade Archives feature suite — that is, button configs, modest display settings, save states and online leaderboards, but not multiple ROM versions or high-score/caravan modes — and not much else.

Which games are included? In chronological release order: QIX, Space Seeker, Alpine Ski, Front Line, Wild Western, Chack'n Pop, Elevator Action, The FairyLand Story, Halley's Comet and The Ninja Warriors. (All but two of these games are currently available as individual Arcade Archives titles, and the other two are confirmed to arrive on the service eventually.)

Why should I care? While Taito Milestones offers virtually nothing beyond ten ROMs and a splash screen and makes no effort to inform or contextualise any of the alleged "milestones" contained therein, it succeeds on two simple levels: one, the ROMs actually function satisfactorily, which is almost never true of packages as spartan as this one, and two, this collection exists almost solely to allow people to buy a reduced-price collection of Arcade Archives games with or without a box and, I mean, it doesn't not do that — it'd cost twice the price to buy them all individually. 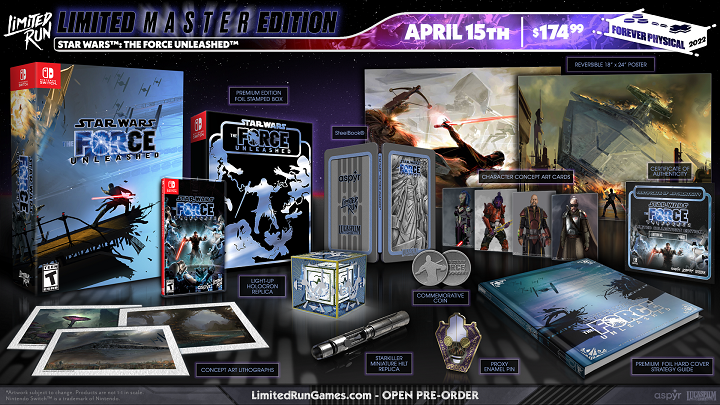 Ahead of next week's digital release comes the usual suite of physical/collectors' bundles for the latest game is what now seems to be an endless deluge of Star Wars game reissues: in this case, a remaster of the late-'00s action game The Force Unleashed — and what's more, it's a remaster of the Wii version, not the higher-budget, higher-hype and (presumably) higher-sold PS360 version. As you can see, the deluxe version comes with all the SW-adorned trinkets you might want, including a hardcover strategy guide. 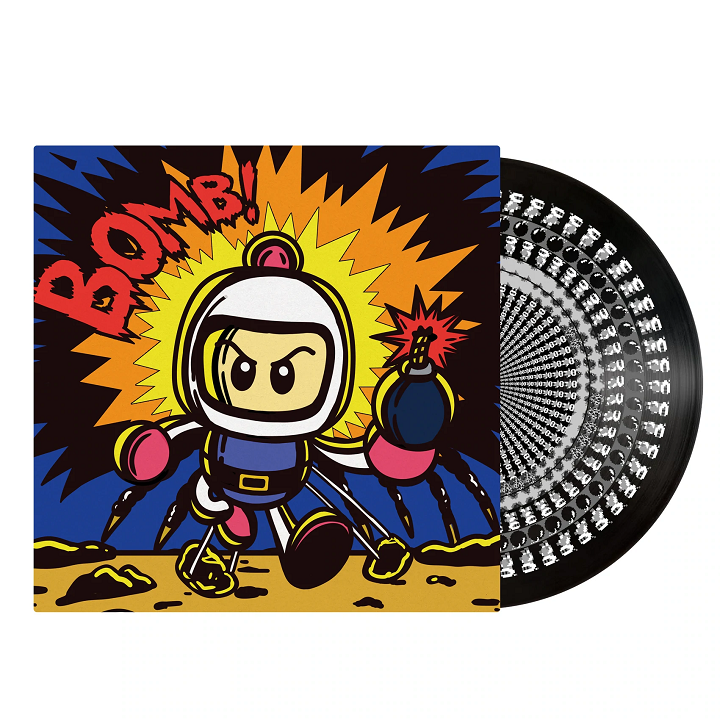 Former Hudson composer June Chikuma has been the subject of renewed global interest in recent years, not just due to the reappraisal of her later videogame works like the house-infused Bomberman Hero (N64) but also her broader work as a serious student and ambassador of traditional Middle Eastern music, but one should not forget that her work spreads all the way back to the NES/Famicom days and catchy little ditties like those heard in the very first NES Bomberman titles... and, if you i forgotten those titles, or just didn't touch them in the face of newer, more playable alternatives, now's your chance to catch up. (The patterns on this LP are simple decorations, by the way: they form a zoetrope image that, when viewed via the right conditions, will appear to animate as they do in the game, as demonstrated here.)