If the triple-threat of Kirby, Snow Bros. and Trio the Punch doesn't excite you, dear readers, then allow me to point out one other relevant release: Taiko Risshiden V DX, a HD remaster of an acclaimed Koei open-scenario RPG simulation that I neglected to add to the roundup due to the fact that it's both unlocalized and geo-locked (on PC, but not on Switch). 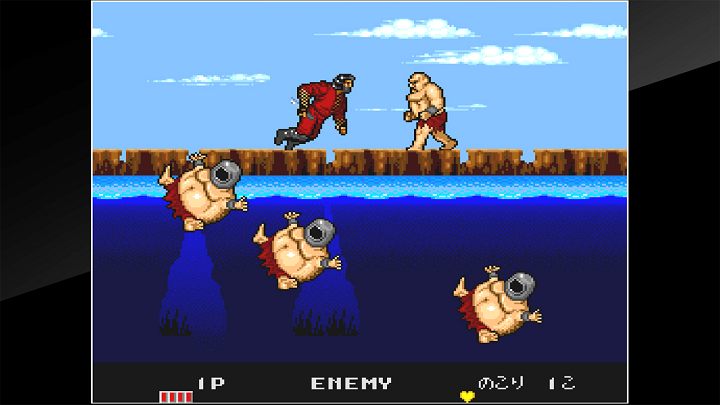 What's this? An incredibly silly, micro-stage side-view action game, originally developed and distributed in arcades by Data East in 1990 and later converted for Japanese mobile phones, followed by a poorly-received emulated reissue for PlayStation 2. Players are tasked with controlling either a ninja, swordsman or Tough Guy through a variety of stages of differing lengths and configurations that, broadly speaking, require the player to defeat enough enemies to trigger a boss encounter, with a between-stage roulette conferring power-ups or power-downs essentially at random.

Why should I care? Trio the Punch represents Data East at their most unfiltered, offering a barrage of absurdities with only loose pretenses towards what one might recognize as "good" game design but without extending into Takeshi no Chousenjou-esque ironic masochism (That said, pick the ninja.)  What's more, it's also a redemptive release for Hamster, who were responsible for the aforementioned, widely-disliked PS2 version and who spent two years from announcement to release making sure the ACA version would be up to snuff.

Useless fact: One change made for this reissue is an ever-so-slight recolor to a certain character modeled after a finger-lickin' fast food mascot.

What's this? The first polygonal main-line Kirby game, developed by HAL Laboratory and released for the Nintendo 64 in 2000; aside from the adoption of polygonal graphics and "2.5D" gameplay, Kirby 64 is notable for allowing players to combine copy abilities to create unique and wide-ranging movesets, a feature that has never quite returned in subsequent games.

Why should I care? You want to experience the resolution to the loose thematic arc established by Kirby's Dream Land 2 & 3, or you just feel like all the other Kirby games are too dang hard.

Useless fact: This was the final original Kirby game directed by Dream Land 2 & 3 director Shinichi Shimomura, who helmed the series in tandem with Masahiro Sakurai during their respective tenures at HAL Laboratory; he seems to have abruptly left HAL and the industry in the early '00s, and his whereabouts and the circumstances of his departure are unknown to this day.

What's this? A remake of Toaplan's cult co-operative fixed-screen action game, originally distributed in arcades in 1990 and ported to several contemporary platforms including the Game Boy, NES and Mega Drive and recently reissued on smartphones and via the Japanese Mega Drive Mini. Developed by fledgling Korean studio CRT Games, this remake offers newly-redrawn visuals and arranged music and complements the original 50 stages with 30 additional stages, complete with original bosses; other features include time-attack and survival modes, leaderboards, basic screen filters and the option to play with the original arcade music. (The DLC, which is included on the physical version, allows you to unlock and play as every enemy in the game, complete with individual abilities and mechanics.)

Why should I care? Of all the fixed-screen action games produced in the wake of Bubble Bobble, Snow Bros. was arguably the most immediately engaging and one with pockets of fandom spread across the globe, so its return to modern platforms has been a long time coming, and whatever one may think of the new visuals, I can only hope that the team behind this remake has managed to maintain the integrity of the original. 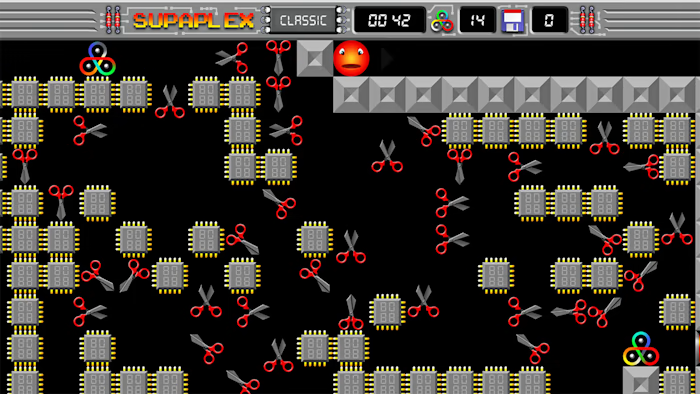 What's this? A remake of the Boulder Dash-style puzzle game Supaplex, originally developed by two Swiss students for the Commodore Amiga in 1991 and ported to MS-DOS; this version recreates the original 110 stages with new graphics and adds control options, instant saving/loading, a game speed setting and other tweaks.

Why should I care? The press release for this game is insistent that Supaplex is beloved worldwide and I see just enough corroborating evidence online to let that statement slide.

Helpful tip: Recent versions of this game were previously released on Steam and smartphones, and I had no idea about any of them because I'd never heard of this game until today.

The Legend of the Dragonflame Highschool Collection

What's this? A two-pack containing one-person doujin dev HUNTERS' Kunio-kun homage The Legend of the Dragonflame High School, originally released on Xbox 360 via the Xbox Live Indie Games service in 2011, and its 2019 PC-only sequel; these ports, handled and published by Ratalaika Games, look to be more or less identical to the originals, save perhaps for a cleaned-up translation.

Why should I care? I am not going to try to pretend that either of these games is of comparable quality to an authentic Kunio-kun game, but they do succeed as a reminder of the charm of XBLIG and the novelty of being able to play and share homespun games with ease on a major home console.

Useful fact: Ratalaika Games was at one time attached to a proposed multi-platform XBLIG anthology that has since fizzled out, but my hope is that this release indicates a renewed active interest in bringing more of the XBLIG library to modern platforms.

Long-announced and long in beta, this QuByte-helmed reissue of Visco's unsung Neo Geo fighting game Breakers and its slightly-more-sung revision Breakers Revenge looks to finally be hitting consoles this year, and Strictly Limited Games is getting in on the action with a range of physical versions for Switch, PS4 and even PS5. (The "standard limited" designation of the cheaper version implies a less-limited standard counterpart at some point, and given that there's not a lot they could cut from this release, I'd expect a standard retail release to be identical in terms of game content.)

Sega's premier Master System RPG has finally been blessed with a vinyl soundtrack release containing both the original PSG music and the lesser-heard FM Adapter tunes, alongside classic reprinted art and liner notes by Gaming Intelligence Agency's Jeremy Parish. As with many Ship to Shore releases, orders went online a couple days prior to this roundup, meaning they may or may not still be available in the configuration of your choice, but various international vendors are offering the LP in either "Palma Blue" (US), "Galaxy Blue (EU)" or clear (UK - Canada) variants.