Some sad news to kick off this week's roundup: Robert Alan Koeneke, creator of the heavily influential roguelike Moria, has passed away at the age of 64. Moria's contributions to the genre cannot be understated, not just in terms of the game's innovations and its place in history as the first "Rogue-like" — that is, literally the first other game like Rogue — but as the first open-source game in the genre, a decision that not only saw Moria evolve into Angband and beyond but helped cement the culture of modding, porting and forking roguelike games that sustained the culture around roguelikes during their formative years and well before their emergence as mainstream commercial entities. Rest in peace.

What's this? A fixed-screen action game starring... whatever the hell a Chack'n is, originally released in arcades by Taito in 1984 and ported to a variety of contemporary platforms including the Famicom, SG-1000 and MSX, and later reissued as part of several emulation-based anthologies. Chack'n is tasked with freeing hearts from cages in order to progress, which can be achieved by hurling bombs left and right and by using Chack'n's extendo-legs to transition from walking on floors to ceilings and vice-versa.

Why should I care? Chack'n Pop's ties to Bubble Bobble are a little overstated — enemies from the former made it to the latter, that's pretty much all they have in common — but it certainly represents the origins of a very particular visual house style for Taito, and I'm sure there are five or six people out there who actually appreciate playing it, too.

Helpful tip: This is the final Arcade Archives Taito release to overlap with the recently-released Taito Milestones compilation; from here, all ACA Taito games will be fresh, starting with Gun Frontier on August 12.

Why should I care? NSO has escalated to the point where they're mining unlocalized and unrequested Japanese obscurities for updates, and I'd like to presume that Retronauts regulars are yearning for exactly that type of content. I should also point out that Kirby not only talks in Kirby's Avalanche but talks immense amounts of crap about his opponents, and that Fighters History is, by a significant margin, the best fighting game currently available on NSO.

Helpful tip: Be sure to watch the above trailer, as Nintendo helpfully offers up a password for Daiva that'll put the game in an action-only mode, shoud you not want to bumble through the untranslated strategy portions of the game.

What's this? A port of the second console-exclusive hack-and-slash spinoff in the Baldur's Gate CRPG series, originally developed by Black Isle Studios and published by Interplay for the Xbox and PlayStation 2 in early 2004; aside from higher resolution support and default access to "new content" that was unlockable in the original game, it's more or less as-is. (Co-op remains local-only)

Why should I care? My understanding is that this sequels skews further from narrative and closer towards open-endedness and the all-encompassing loot treadmill ⁠— I'm no longer able to tell good games of this type from bad ones, so give it a shot and lemme know whether it scratches whatever ungodly itch might currently be bothering you.

Useless fact: It wouldn't be quite accurate to label Dark Alliance II as the game that killed Black Isle Studios, but they were shut down by Interplay the moment it went gold.

What's this? The sequel to last year's Capcom Arcade Stadium compilation (which seemed to present itself as something that would be regularly expanded with no need for standalone sequels, but whatever), boasting 32 new games and all the same features, including rewind and fast-forward settings, save states, various per-game settings for factors such as difficulty, screen filters and borders, online leaderboards and achievements. (Extra content, including invincibility options and additional screen borders/arcade frames, are also available as free and/or paid DLC.)

Why should I care? With the release of this collection, Capcom's managed to get almost all of their 2D arcade library onto contemporary hardware, and while this particular collection has a lot of overlap with other recent and more specialized Capcom collections, this collection presents them with a feature suite that is more amenable to single-player or casual play for players of all skill levels, so they do offer a genuine alternative to the other package which focus on relatively serious online play. (There are a lot of quality exclusives here, too: Saturday Night Slam Masters! Black Tiger! Gun.Smoke! Pnickes! Capcom Sports Club!)

What's this? A remake of Square's 1994 Super Famicom multi-scenario "omnibus RPG", originally developed in collaboration with several mangaka from the publishing company Shogakakun and released exclusively in Japan, to an audience that was already occupied with Final Fantasy VI, Chrono Trigger and/or Earthbound, with equally modest 20th-anniversary reissued released for the Wii U and 3DS Virtual Consoles  This version of the game is presented with the hybrid pixel art/polygonal "HD-2D" style popularized by Octopath Traveler and boasts a newly re-arranged soundtrack by original composer Yoko Shimomura, voice acting during key dialog and some other modern touches like optional waypoints and a minimap, on top of a mostly-faithful recreation of the original battle system and scenarios.

Why should I care? For better or worse — mostly better, let's be clear — Live A Live isn't really an RPG so much as a collection of interesting vignettes with an RPG-esque veneer and a through-line that takes a while to present itself, with wildly different themes and conceits from scenario to scenario, and while it could be said that the remake doesn't do enough to sand off some of the more obtuse adventure-game-esque progression blockers, this remake stands tall as a tribute to the other, more progressive and daring side of Square that existed and continues to exist in the shadow of their increasingly-conventional tentpole series. (It's also yet another first-ever localization, which is always welcome.)

Useless fact: Fan-favorite Undertale BGM "Megalovania" was so named in reference to a particular Live A Live boss theme, "Megalomania", and the two tunes have been spliced together at various official Live A Live concert performances. 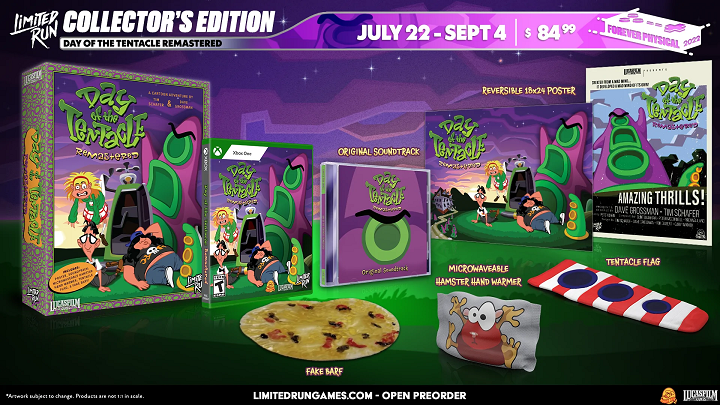 If the recent Monkey Island revival news has left you with LucasArts on the brain, LRG's got just the thing for you: physical copies of the well-received remaster of the Maniac Mansion sequel Day of the Tentacle, available not just for PS4 and PC but also Xbox, a platform long out of LRG's reach, and with all the fake barf you might possibly want.