The arguable highlight of this week's roundup, a reissue of the extremely pricey Neogeo Pocket Color game Rockman Battle & Fighters, is perhaps most noteworthy for what it portends in relation to future NGPC reissues: that game was 100% Capcom made-and-published, so if SNK's willing and able to make that deal happen, what else might they be able to re-release? Sonic Pocket Adventure? Ogre Battle Gaiden? Any of the dozens of Aruze-made pachislot junk that sent the hardware to a premature grave?

What's this? Namco's strategic tunneling action game, originally released in arcades in 1981 and ported far and wide, including versions for various Atary systems, NES, Game Boy and countless compilation appearances. Players are tasked with defeating all the enemies on each stage by inflating them using a harpoon-esque pump weapon; the player can freely tunnel through soil in order to reach or flee from enemies, and dislodged rocks can also be used to take out foes.

Why should I care? Of all the "golden era" Namco games, Dig Dug might be the most improvisational and least rote, and revisiting it now might reimpress the notion that the many side-view digging games released in its wake didn't add or diverge from the source material to the degree one may have presumed.

Useless fact: The most recent mainline Dig Dug game was a browser MMO based on Dig Dug II, of all things.

What's this? A handheld conversion of the vaguely fighting game-esque boss rush games Mega Man: The Power Battle and Mega Man 2: The Power Fighters, originally developed and distributed in arcades by Capcom in 1995 and 1996, respectively, with the Neogeo Pocket Color version released exclusively in Japan in mid-2000; this version recreates the content from both games in a single package — that is, four playable characters and 40 boss fights from Mega Mans 1 through 7 — and adds a collectible data entry feature for each of the bosses. (Despite the localized title, the game itself remains untranslated, not that there's much, if any, crucial in-game text.)

Why should I care? You're able to admire just how much content they were able to cram onto the cartridge and how faithfully everything was demade for 8-bit spec, without constantly comparing it to the authentic, full-fat arcade versions which arrived via Capcom Arcade Stadium 2 just days ago. (This is also one of the most expensive NGPC games, so an alternate legal avenue to owning the game is always nice.

Helpful tip: SNK's confirmed a second Neogeo Pocket Color Selection compilation, and while they haven't announced what'll be on it, you can guarantee this game will be included alongside the likes of SNK vs. Capcom: Card Fighters Clash, Big Bang Pro Wrestling and Biomotor Unitron, among other games.

What's this? A two-pack containing emulated versions of two unlicensed Famicom and Mega Drive shooting games, both bearing the English title Thunderbolt 2 and both released to the pirate market by Taiwanese manufacturer Gamtec in the mid-'90s; as is typical of a QuByte Classics release, this package slaps 'em into an emulator wrapper with a few basic settings and little else. (As far as I can tell, the "localization" amount to replacing the original title screen logos, whose Chinese title is written identically to another little shooting game named Raiden II.)

Why should I care? There's an interesting story to be told about the geneaology of unlicensed Taiwanese console game software and the legacy of Gamtec... unfortunately, this package makes no attempt whatsoever to paint that story and instead offers an unceremonious, take-it-or-leave-it package with two games you're not really going to want to take. That said, you may want to grab a copy of this collection for the sole reason that it seems like something that can't possibly be sold for long, as explained below...

Helpful tip: The Famicom version of Thunderbolt 2 may be an original Gamtec production but the boss and stage designs and motifs are all direct imitations of the TurboGrafx-16 game Super Star Soldier, whereas the Mega Drive game is a direct hack/reskin of the port of Namco's Dangerous Seed, which seems like it'd pose all sorts of legal issues for anyone foolhardy enough to try to sell it on a digital storefront in 2022.

The title says it all: this is a "16-bit" fan reimagining of arguably the most respected of the Game Gear Sonic games, Sonic Triple Trouble, which not only boasts improved visuals and sound, more conventional physics and competent performance but also a bevy of additions (competition mode! playable Knuckles! playable Nack/Fang!) and a ton of clever reinterpretations of the original game's stages and gimmicks. 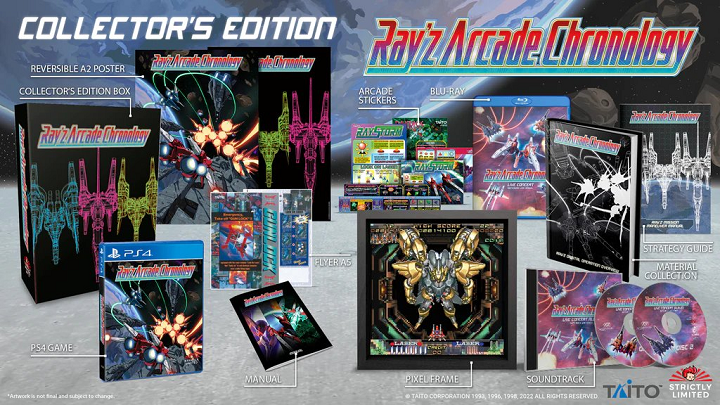 As per usual, Strictly Limited Games is handling the latest Taito collection, this one centered on the vertical lock-shot shooting game trilogy RayForce, RayStorm and RayCrisis; the Japanese release of this collection controversially offered a downloadable one-stage prototype of the famously canceled R-Gear exclusively via an extremely limited Amazon Day promotion, but SLG's versions will include R-Gear on the disc/card, so one needn't worry about once again being denied access to the full contents of the collection. (The companion retail version of this collection, scheduled to be released by ININ, will not only be missing R-Gear but RayForce as well.) 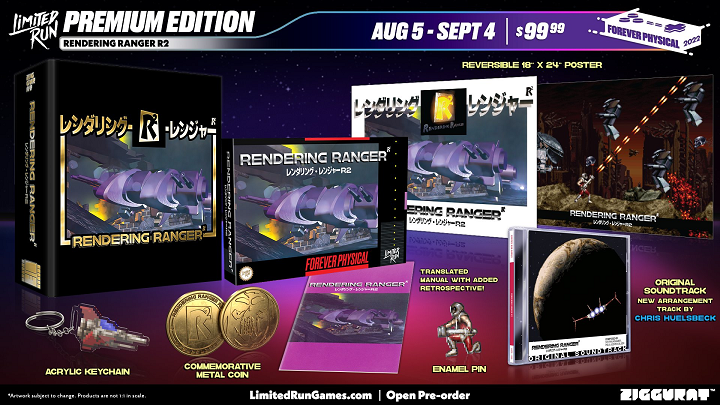 Tangential from last week's deluge of Turrican reissue is this first-ever reissue of the run-and-gun/shooting game Rendering Ranger R2, originally developed and helmed by original Turrican creator Manfred Trenz and, despite being a European-made game, released exclusively for the Super Famicom in extremely limited quantities. Now, after 25+ years, SNES owners can finally witness some of the most technically accomplished visuals ever achieved on the hardware, for less than the cost of a small Pacific Island nation.