This week's update already offers a smorgasbord of re-releases, but if you'd like to play something new that's also kinda old, you may want to check out Atari Mania, a somewhat WarioWare-esque narrative adventure centered around microgames based on all the old Atari games you know and... know.

What's this? A fixed-screen overhead shooting game set in a world of toys, originally developed and distributed in arcades by Namco in 1986, with a port produced for the PlayStation compilation Namco Museum vol.1 and an emulated reissue on the Japanese Wii Virtual Console in 2009; one or two players are tasked with destroying the boxes and enemies littered around each stage in order to uncover enough hearts to reveal the door that leads to the next stage, with the wrinkle that the various enemy types can only be taken out with specific weapons that are also hidden around the stage.

Why should I care? You're a sucker for games that paint formidable difficulty with a cutesy veneer, or you just want to experience the Battle City sequel you never knew existed.

Useless fact: While Toy Pop has seldom been reissued, it has lived on in a few odd ways: the main player-character Pino makes regular appearances in Namco's baseball series Famitsa, and the game's music has shown up in medleys and in-game cameos for decades, with the name entry BGM serving as the hold music for the phone line at Namco's original office for many years.

What's this? The third entry in a series of detective mystery adventure games centered around long-suffering editor Izumi Kido and her rambunctious client, novelist Kyougetsu Masamune, originally developed and released for Japanese feature phones by G-MODE in the early-'00s; in this episode, the ever-traveling Kyougetsu summons Izumu to a ryokan for a work meeting, only for her to find Kyougetsu implicated as a suspect in a murder that occured on the premesis.

Why should I care? This is yet another detective series that I'm way, way behind on, but the online reaction to the announcement of this release seems to indicate that it's much grimmer than the prior entries in the series, so that's somethin'.

Useless fact: I got nothin', sorry.

What's this? A casual flight simulator developed as a collaboration between Nintendo and the 3DCG studio Paradigm Simulation and released as a launch title for the Nintendo 64 in all regions; in addition to the mission-based modes which task players with completing a variety of airborne challenges using specific vehicles, there's also several alternate modes including a no-stakes "birdman" mode for players to explore the vast open stages at their leisure.

Why should I care? Without trying it first-hand, I can't safely recommend it — this is a game that will live or die on the fidelity of its analogue control, which hasn't always translated accurately for other NSO releases — but, presuming they did it justice, you'll be in for a combination of relatively high-ceiling manoeuvring tests with low-pressure exploration, and given the original game had an uncapped framerate, it'll probably look smoother than it ever did on original hardware, too. (This is also a game that never made it to either incarnation of the Virtual Console, presumably due to the inclusion of Twin Towers-esque skyscrapers in a certain stage.)

Useless fact: Nintendo put an inordinate amount of effort into their trailer for this release (that is, more than virtually none at all) so I urge everyone to watch it if they haven't already done so.

What's this? An action-platformer starring a bearing-lobbing robot, originally developed and published by UK Microprose for the Sega Genesis/Mega Drive in 1993; plans for SNES and Amiga releases were scrapped, but dumpster-divers Piko Interactive salvaged the SNES port for commercial release in 2019. All the classic wander-y, jump-and-run malarkey of the original is presented here with typical Qubyte aplomn: that is, it runs, adequately or not, and that's pretty much it.

Why should I care? I have played this game at least half a dozen times and have yet to form an opinion on it.

Why should I care? Youhave residual memories of seeing or playing this game on one of a million demo discs, or you're curious to investigate just how cleverly the developer was able to use 3D models and stage dressing to mask the inherent un-three-dimensionality of their map engine. Seriously, it's quite impressive for a low-spec DOS game.

Useless fact: You may be more familiar with Action Forms via their more widely-played and proliferated FPS series, Carnivores.

Kamiwaza Way of the Thief

What's this? A remaster of a stealth-action game starring an honorable thief, originally developed and published by Acquire in 2006 for the PlayStation 2, exclusively in Japan; aside from being localized for the first time, this remaster runs in full HD resolution with up-res'd textures and sports a new tutorial and other quality-of-life features like an autosave function.

Why should I care? '00s Acquire made a name for themselves with games like Tenchu, Way of the Samurai and Shinobido that touted player freedom, not-too-complex action and historical settings that were able to accommodate a lot of silliness, and while Kamiwaza doesn't reach the heights of those games in any particular metric, it scratches many of the same itches, and the very exaggerated "stealth" system offers an interesting contrast to the usual ninjas-and-assassins shtick.

Helpful tip: The PC port is a NISA job, so expect a bare minimum in terms of framerate, painless controller support, etc.

While the last few years have seen Sega reintroduce the Puyo Puyo series to international audiences in an official capacity, they've also seen multiple fan translations of the many games, spinoffs and sister titles from both during and before Sega's ownership of the series, and with this — a translation of the lead version of Compile's final mainline Puyo Puyo title, Puyo Puyo~n, the entire mainline series is now available in English in one form or another. The patch works via emulation and on real hardware via a variety of different boot/loading methods, so have at it. 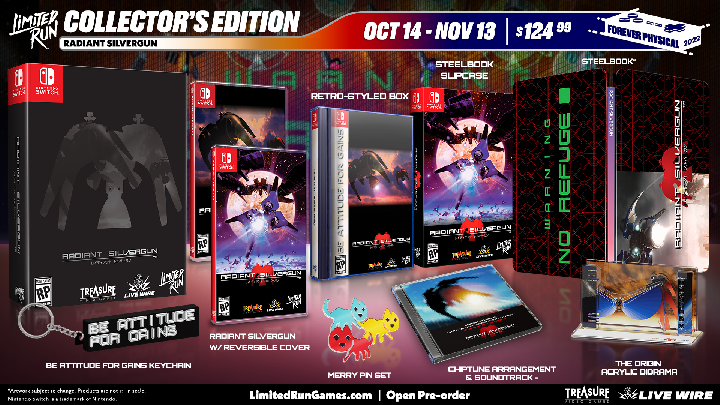 You might'nt necessarily know it for the way the game is venerated the world over, but Treasure's weapon-switching shooting game Radiant Silvergun has never received a physical release outside of Japan, or indeed any sort of physical release since its original release on Sega Saturn some twenty-five years ago (a release that was, thankfully, narrowly spared the Working Designs treatment). Now, LRG and Live Wire are teaming up for a physical release in a few different configurations, including a deluxe package with a Saturn-esque case, a preview of their upcoming chiptune arrange soundtrack and other goodies. (Live Wire did patch some of their port's lingering audio issues today, by the by.) 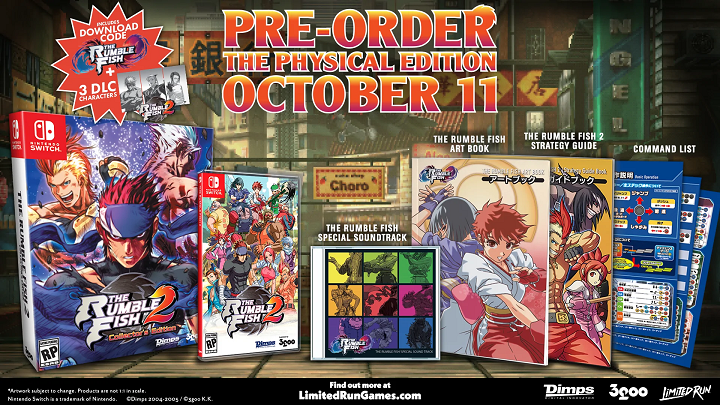 Before SNK-successor Dimps was inescapably sucked into the world of Dragon Ball games and contract work on established franchises like Street Fighter and Sonic the Hedgehog, they tried their hand at a few original titles, the most beloved of which being their uniquely-animated 2D arcade fighting game series The Rumble Fish; that series' second and best title is coming to consoles and PC for the first time at the end of the year, and LRG has the early hookup on physical versions. Do note: the physical collector's edition comes with a download code for a port of the original game that will not be made available for separate individual purchase, as well as a download code for three extra characters (boss characters that weren't playable by default in the original arcade version) that may or may not be another collector's edition exclusive.