For the sake of letting pleasant memories remain pleasant, let's pretend we lost our invites. 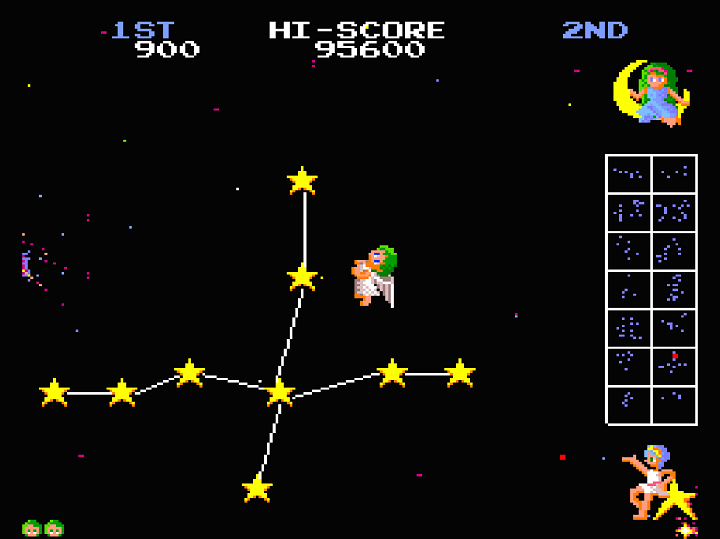 What's this? A multi-directional action game with a very loose angel motif, originally developed by Alice and distributed in Japanese arcades by Nichibutsu in 1984. The player is tasked with assembling constellations in the night sky by touching their constituent stars in sequence; the angel is ordinarily defenseless but can fire arrows at enemies by collecting the bow item that periodically appears somewhere in the stage, and once all the constellations are assembled, an odd prince/princess "docking" minigame awaits.

Why should I care? Putting aside the fact that this is a perfect example of a game that's liable to be forgotten for another forty years after this reissue, Itazuri's odd free-roaming-dot-eater feel is one that, despite sharing elements with contemporary games like Time Pilot or Bosconian, feels largely unique.

Useless fact: The aformentioned "docking" scene is a humanoid take on a similar mechanic from Nichibutsu's Cresta series, with embracing humans instead of spacecraft, but the developers knew exactly what could be inferred from the minigame when they included it, so take it however you want to take it.

What're these? The original entry in Nintendo's popular family-friendly, friend-fatal minigame-centric boardgame simulators, originally released in 1998, and the sequel released the year after; Mario Party 2 has been reissued several times before, but this is the first-ever reissue of the original, presumably due to certain minigames that seemingly demanded palm-tearing contortions of the analogue stick.

Why should I care? You've managed to avoid irreperably damaging your joycons until now and you feel like that ought to change. (This reissue does include a pre-game warning asking people not to spin the analogue stick with their palm, but I don't know if they've actually tweaked the minigame(s) that encouraged that motion to begin with, as with recent best-of entries, or if you'll have no choice but to find a way to spin that sucker without causing blisters.)

Useless fact: Composer Yasunori Mitsuda, who wrote the soundtrack for Mario Party as his first freelance job after leaving Square, recently told a frustrating story about how an unnecessarily vague directive from the game's music director caused him to compose hundreds of pieces of music for the game that went completely unused.

What's this? An emulated double-pack containing the 1992 Super Nintendo version of Vivid Image's tongue-in-cheek samurai side-scroller, originally released for Amiga and Atari ST in 1991, and the 1994 Mega Drive version of the even sillier and more action-packed sequel, Second Samurai, originally released for the Amiga in 1993; as always, QuByte's emulation suite is as slapdash as ever, with little beyond save states and basic screen options.

Why should I care? If you're looking to dip your toes into that specific strain of '90s sidescroller borne from European computers, these games might be the place to start: the second one acquits itself reasonably well as a follower of late-era Japanese console action games, and the first one has just enough vestiges of Amiga-esque wanderlust to satiate those who can appreciate that particular approach to level design in very smal doses. Also, these games are dumb, dude.

Useless fact: The Super Famicom version of First Samurai, published by Kemco, became something of a cult hit due to its extremely dubious interpretation of all things samurai and, via a strange occurence of events, a First Samurai image song recorded by a former teen pop star who was coaxed out of retirement as an adult to sing this one tune and then immediately retreated back to civilian life.

What's this? A remaster of New Zealand studio Sidhe's critically-acclaimed horizontal brick-breaker Shatter, originally released as a PlayStation 3 digital title in 2009 and on PC the following year; this new version sports retuned visuals and audio (including remastered music from composer Module) and support for the highest framerates and resolutions your platform of choice can muster.

Why should I care? Well, given early reports about the new version's technical performance (plus whatever subjective preference you may have for the original visuals), you may want to stick with the original PC version, as it already offers most of the technical perks of the "remaster", but let's charitably assume it'll be patched in short order... in which case, you may want to take the opportunity to play one of the more unsung future-chic retro games released in the wake of now-classics like Pac-Man Championship Edition and Space Invaders Extreme.

The soundtrack to Taito's triple-screen arcade brawler The Ninja Warriors has cemented itself at the pinnacle of classic Taito music, with the opening track "Daddy Mulk" routinely topping popularity polls among Taito fans, arcade-heads and general classic game music dorks for decades, so I'm sure this vinyl reissue — advertised as the first-ever vinly printing, which isn't strictly true, but let's go with it — requires little introduction. As per usual, Ship to Shore has the exclusive colored variant, with clear variants available from Light In the Attic, VinylGuru (UK) Black Screen Records (Europe) and Very Ok Vinyl (Canada).