Black Fly's the name of the ship in Metal Black, dontcha know. There's a joke in there somewhere, I swear. 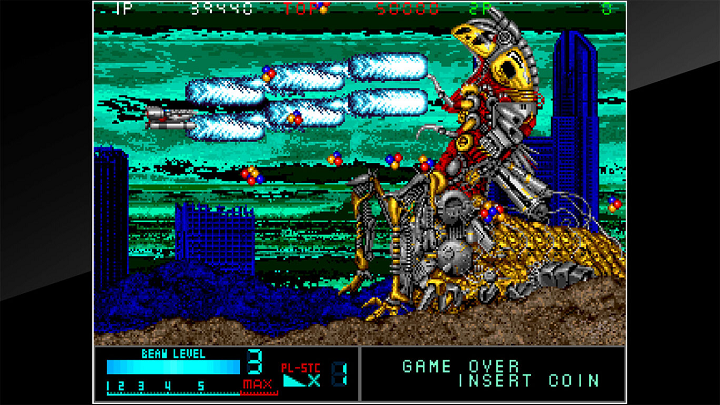 What's this? A horizontally-scrolling sci-fi shooting game with a stark and somewhat trippy sci-fi atmosphere, originally developed and distributed in arcades by Taito in 1991 and later ported to the Sega Saturn and PlayStation 2, with a recent emulated reissue via the Egret II Mini. Each of Metal Black's stages is adorned with bleak and surreal imagery, but the game system itself is quite straightforward: the player ship is equipped with a single forward-shooting weapon that can be strengthened by collecting the "neutron" items scattered liberally around the screen, and the player can spend their absorbed neutron energy to fire a huge beam that can clash with bosses' beam attacks until it runs out of energy. (There are also two first-person bonus stages that require the player to use homing missiles to destroy as many enemies as possible within the time limit.)

Why should I care? Metal Black has something of a reputation for being all style and little substance, which is perhaps a little unfair — it's by no means a bad game, and its relatively straightforward and unadorned stage design has ultimately allowed it to find a wider audience over time than similar, more challenging or harsher games — but this is definitely a game you'll primarily want to play for presentation and atmosphere, and one that had a lasting influence on both the direction of Taito's own shooting game output and that of their contemporaries. Plus, Asuka likes it.

Useless fact: You won't be able to glean much of a story from Metal Black just by playing it, but the game actually has two widely-circulated plots: a simple "destroy the enemies!" setup that purports to be a sequel to the earlier Gun Frontier, which was a dummy story circulated to upper management that was unintentionally forwarded to the media and widely circulated as the game's plot, and the real, intended story that the creator deemed too dark for the audiences of the day, which was later revealed via manga and developer interviews and paints a tale of military corruption, martyrdom and dissociation from reality... but no matter which of these stories you take to heart, you'll still get to see a cat at the end, so stick with it.

What's this? A 10th-anniversary Switch port of Might and Delight's gravity-manipulating sci-fi puzzle platformer, originally released digitally on PlayStation 3, Xbox 360, PC and Mac; accidentally stranded on an alien planet, one or two players are tasked with journeying across a vast and frequently hostile alien planet, with your primary tool of traversal being a tossable gravity well that, after colliding with a surface, will project a perpendicular beam that can be used to propel the players or other objects and items.

Why should I care? For better and worse, Pid represents a nexus of all the mainstream indie sidescroller trends of ten years ago — it's a gimmicky physics-puzzler and a post-Meat Boy precision test and a contemplative, capital-a Atmospheric experience, and your love for any one of those facets may be enough to make up for the shortcomings of the others.

Useless fact: This game shares a little developer DNA with that of Bionic Commando Rearmed, not that you'd necessarily pick it without being told so.

What's this? The latest incarnation of the fondly-remembered historical strategy series that has persisted in one form or another since the late '70s, now sporting a mixed-medium graphical style, revised and expanded game systems (including fishing!) and new narrative beats that incorporate a Native American perspective on colonial frontier life.

Why should I care? Despite decades of americentric cultural hegemony, I have virtually no experience with or reverence for any version of this game nor the period of history it purports to represent... so, perhaps I should pay this version some mind, if only to acquaint myself with what I'm regularly assured is a beloved cultural touchstone. Perhaps you'd simply like to buy it as a protest to the many, many idiots online complaining about "wokeness", iunno.

Useless fact: In case being a Gameloft joint wasn't enough of a clue, it might be worth pointing out that this game debuted on Apple Arcade a year or so ago, and is virtually unchanged on Switch and PC.

What's this? An emulated reissue of a vertically-scrolling shooting game originally developed  by Epyx and published by Atari Corporation for the Atari Lynx in 1990; this version offers the usual basic emulator suite — save states, controller configs, basic screen/filter options — but, to my knowledge, does not support any of the link cable functionality of the original game, meaning the four-player multiplayer mode is off-limits.

Why should I care? In lieu of doing the sensible thing and designing their vertical shooter to be played with the Lynx held vertically, Zarlor Mercenary's designer/s instead opted to make it really slow and stuff in a bunch of shop/upgrade mechanics in the grand euroshmup tradition, so if you're hankering for a slower and uglier take on the likes of Tyrian, have at it.

Helpful tip: In recent months, Pixel Games UK has published several Lynx games on Steam, as well as a multitude of microcomputer games from the catalogs of Gremlin Graphics, Beam Software and others that, due to concerns about the legality of the licenses, I've declined to mention until now; frankly, I'll probably forget to look into it for another eight months, so I'm mentioning this one game now so as to tip y'all off and allow you to continue paying as much or as little attention to their current and future output as you deem fit.

If there's anything people know about Bomberman Hero, the Nintendo 64's awkward not-really-a-Bomberman platformer salvaged from a cancelled Bonk game, it's that June Chikuma's acid techno/breakbeat-infused score stands among the very best music the N64 had to offer, so I presume this first-ever vinyl soundtrack requires no introduction. As always, Ship to Shore has the plug on an exclusive color, with pink variants available from Light in the Attic (US), Black Screen Records (EU/UK) and Very OK Vinyl (Canada).