I've conducted a few developer and composer interviews while I've been here in Tokyo; it was actually kind of the point of my coming here. You can expect to see those in in full here on the site in the near-term — probably next month, is my guess. 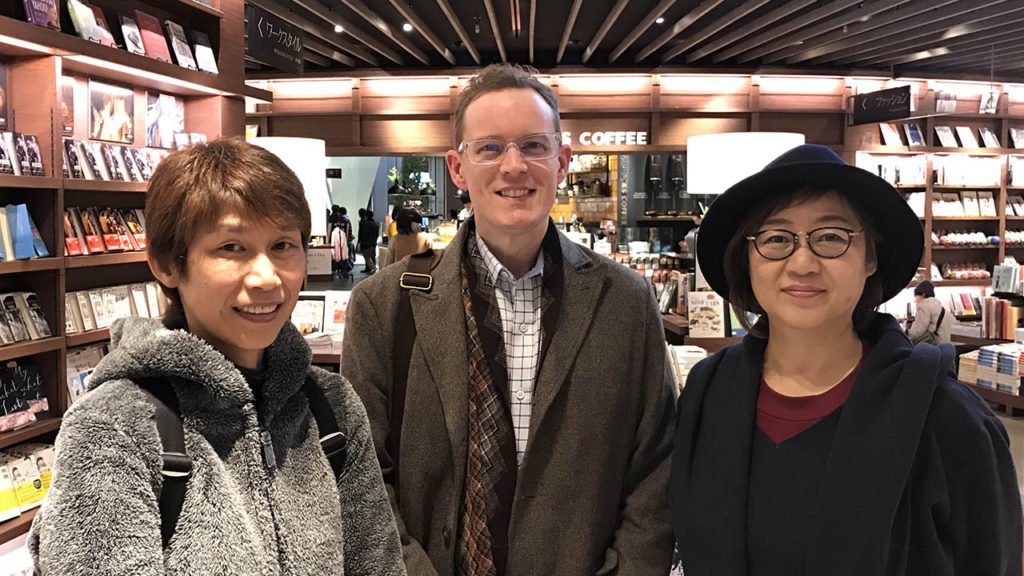 There was no common thread in the who of my appointments, but I did notice a common thread in our conversations. Yesterday, I met with two very talented women who used for work with Capcom, Junko Tamiya (left) and Harumi Fujita (right). (I'm the one in the middle, just so there's no confusion.) Both of them composed music for Bionic Commando — Fujita the arcade themes, Tamiya the NES adaptations and original music — so naturally I was interested in chatting with them.

We had an interesting and fairly lengthy conversation on a variety of topics, but afterwards Ms. Fujita laughed and said she wanted to ask me some questions about video game history. They both admitted they had to wrack their brains a bit to remember specifics of games they worked on 30 years ago, which is understandable — they experience games not as finished products like we do, but as nebulous works-in-progress that don't necessarily connect to the stories we see on the consumer side. For example, they each worked on different versions of Strider (NES and Arcade), but while they remembered that the Famicom version of Strider for NES never shipped, they had never heard about the manga that was supposedly a key part of the game's planned multimedia blitz.

What made Ms. Fujita's confession particularly striking was that Yuzo Koshiro had actually predicted that exact thing a few days prior. I asked him a lot of questions about his work outside of being a composer, which he rarely is interviewed about, and he had to give his responses some serious thought. The interview turned out great, but he warned me afterwards that the other composers I'd be interviewing would probably have an equally tough time answering my questions. "It's been a long time," he admitted, "and I've forgotten a lot of the details of things that happened back then. They probably will find it difficult, too."

Which, of course, is why I want to talk to everyone I can, while I still can. My hope is that Retronauts will afford me the freedom to do more developer and composer interviews. I want for us to inquire about and write down these stories while we still can. I think about all the important game creators I will never be able to interview — the Doug Smiths, the Satoru Iwatas, the Jerry Lawsons — and the reality of the fact that these games happened 25, 30, even 40 years ago suddenly feels less like fun trivia that gives everyone an excuse to write an anniversary feature and more like a ticking clock.