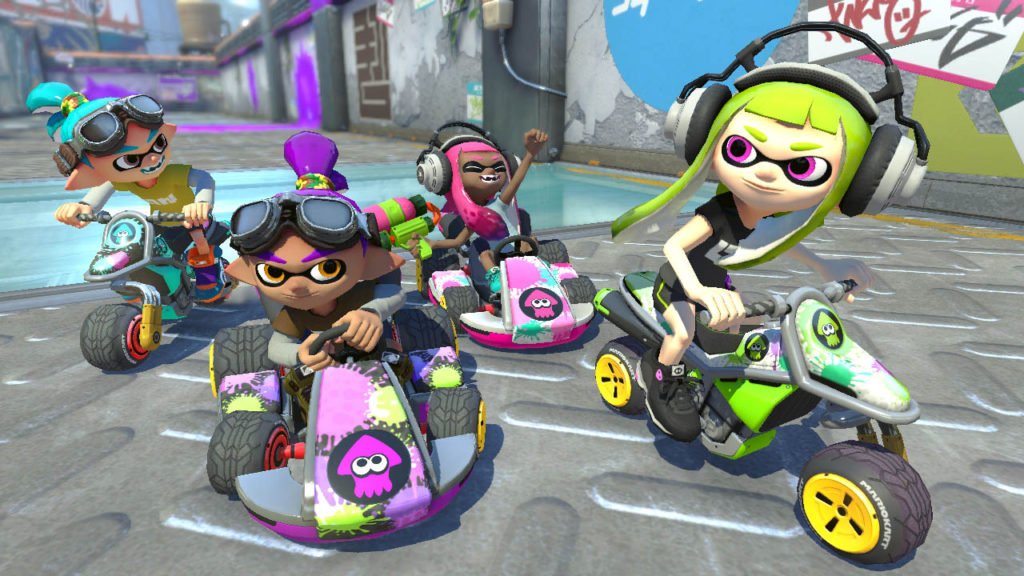 I didn't really play much of Mario Kart 8 in its first run on Wii U. Much as I liked the Wii U console — that poor, benighted thing — sandwiching the joyless mundanity of Mario Kart Wii between the excellence of Mario Kart DS and Mario Kart 7 helped turn the series irrevocably into a portable experience for me. And while Mario Kart 8 proved to be every bit the equal of its immediate predecessor, if not better, its being on Wii U meant I had to play it on a television. Alas, Nintendo, I just can't go back.

As it turns out, my reticence worked out for the best: I was, it turns out, simply saving myself for Mario Kart 8 Deluxe. Not only does the Switch's "remastered" version compile the entirety of the Wii U's original release and downloadable updates into a single package (along with some new content), it does so in that all-important portable format.

Yes, I know: Technically, Switch isn't a "handheld" system. Nintendo has gone to great pains to present Switch as the Wii U's successor to the console market, leaving ample room for 3DS as its portable offering — not surprisingly, given the remarkable 3DS lineup they've laid out for the remainder of 2017. And Switch's on-the-go fluidity remains its strongest feature. It feels capable if somewhat underpowered as a console, but its makes for an extraordinary portable device.

I'm not sure if you could reasonably call Mario Kart 8 Deluxe the Switch's killer app when (1.) Switch also has Breath of the Wild and (2.) MK8D is ultimately a marginally tweaked version of a game that launched four years ago. Technicalities aside, though, what MK8D offers is an intoxicating glimpse of the play experiences capable with Nintendo's new handheld. Console. Handheld-console hybrid. Whatever.

Docked, MK8D doesn't really do much to sell itself. That's how I first experienced it at Nintendo's pre-launch event back in January, and it didn't do much for me then. If you skipped owning a Wii U, sure, you finally have a chance to play the excellent latest entry in this long-running racing series. And if, like me, you never bothered with the Wii U version's extensive DLC offerings, it's pretty nice to have all those extras available and unlocked from the start.

The moment you launch the game, it offers four dozen tracks, each playable in five different difficulty levels (including mirror mode), with enough characters to choose among to inspire envy among Capcom's "Vs." fighters. The DLC material included here contains some reused vintage content, of course; about half the tracks you can play on are legacy remasters from older games, spanning from the Super NES original to the dreaded Mario Kart Wii. (Turns out the Wii tracks are pretty fun when divorced from the game itself.) And you could easily cull about half the character lineup and never miss them. Does anybody really want to play as Metal Mario or Pink Gold Peach? But, on the other hand, you can also choose from a decent selection of non-Mario characters, which breathes some new life into the lineup. Some are new to this version — Splatoon's Inklings, for example — while others showed up as DLC add-ons to MK8. Of them all, I think Isabelle from Animal Crossing may be my new favorite Mario Kart racer, if only because she spouts her in-race taunts entirely in Animal Crossing gibberish. 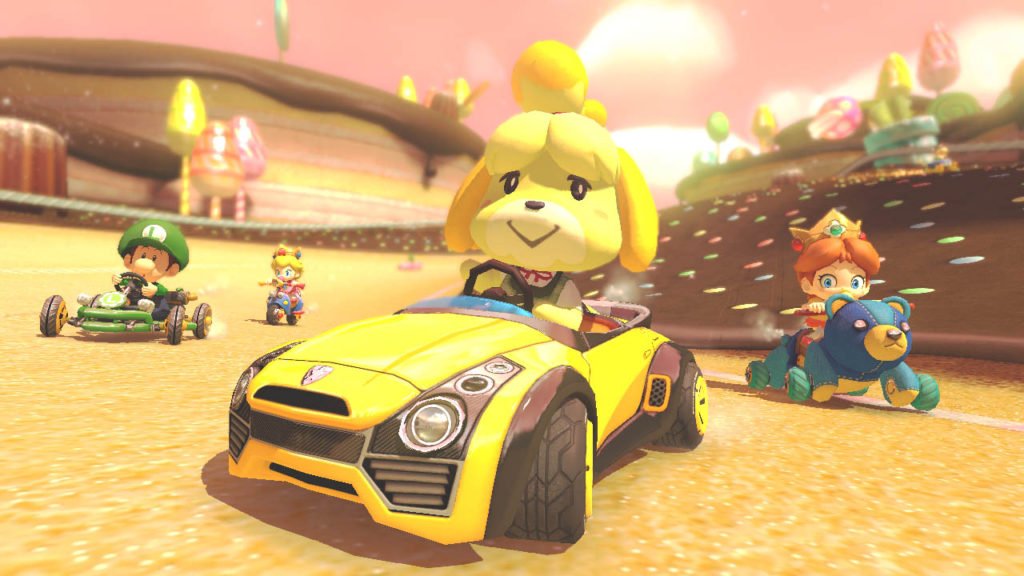 The new, non-Mario material goes a long way toward freshening up the MK8D package, especially when it comes to courses. We've been racing through Ghost Houses, Bowser's Castles, Luigi Speedways, and Rainbow Roads for 25 years now. And while it's amusing to have a Yoshi-themed race track in which the speedway is shaped in the outline of the baby-voiced dino itself, I find myself drawn far more to the opportunity to cruise through, say, Hyrule (at least on something faster that a grumpy pony). It helps that these excursions beyond the Mushroom Kingdom demonstrate some of the liveliest attention-to-detail MK8D offers, such as the way the F-Zero course's "damage zones" create drag on your kart or the fact that your coin indicator icon is temporarily replaced by a bag of bells for the duration of the Animal Crossing track.

Great as all of these details may be, though, none of this really gets to the heart of what makes MK8D so momentous: Its flexibility. It's the first major release for Switch that takes full advantage of the system's dynamic nature. Bomberman was fine, Snipperclips was amusing, and 1-2-Switch made for a decent icebreaker, but with MK8D we have a Switch title with near-universal appeal, a ridiculous amount of content, and substantial mechanics — and it's been heavily revamped to allow players to enjoy competitive racing under an enormous variety of circumstances. 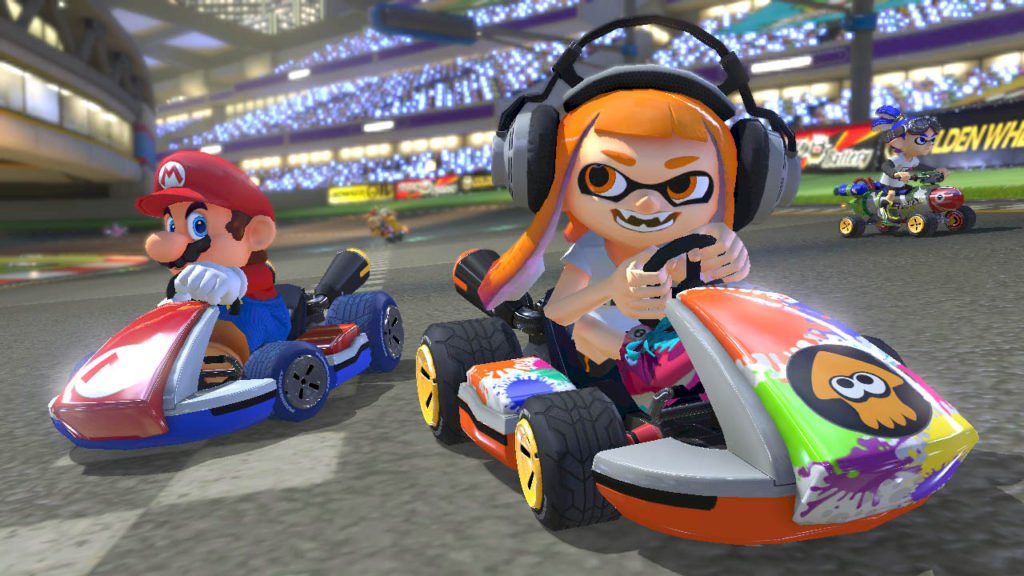 Fundamentally, Mario Kart games haven't changed all that much since the Super NES original. Still, a few key moments in the series' history stand out. Mario Kart 64's addition of proper 3D geometry to course designs allowed for more complex track designs and the wild unpredictability that comes in uneven race surfaces. Mario Kart DS added proper online multiplayer. And now, this: The freedom to play with others, anywhere, at a moment's notice.

MK8D shines brightest when you play with others, and Nintendo has added in a huge number of multiplayer format options. That's true in terms of content — the Battle Mode this time around is excellent — but more importantly, it affects how you play as well. Console-based Mario Karts have always allowed split-screen multiplayer and, more recently, online racing as well; portable Mario Kart games have always included local competitive play, along with online support beginning with Mario Kart DS. MK8D incorporates all of those options, too. But then it ups the ante. In addition to both handheld and docked wireless play, splitscreen docked play, and multi-system local wireless play, you can also play splitscreen on the handheld itself by disconnecting the controllers and using them for impromptu head-to-head racing.

Of course, this has been Switch's sales pitch all along. But it's one thing to watch stylish 20-somethings grinning through a manicured promotional video and quite something else to prop up a Switch on a kitchen counter, hand the Joycons to a couple of kids, and let them get to racing against one another with a single, self-contained game system. And while it's not the 100% frictionless experience Nintendo's demo reel would suggest, it's nevertheless quick, easy, and completely engrossing.

I could play MK8D and weigh in on it with the perspective of a seasoned adult, but I found far more value in putting it to the test by letting my young nephews and cousins give it a go over the weekend. What I found was that, yes, the game and system both were instant hits with a gaggle of kids who until then had been aware of Switch but had little real interest in it. 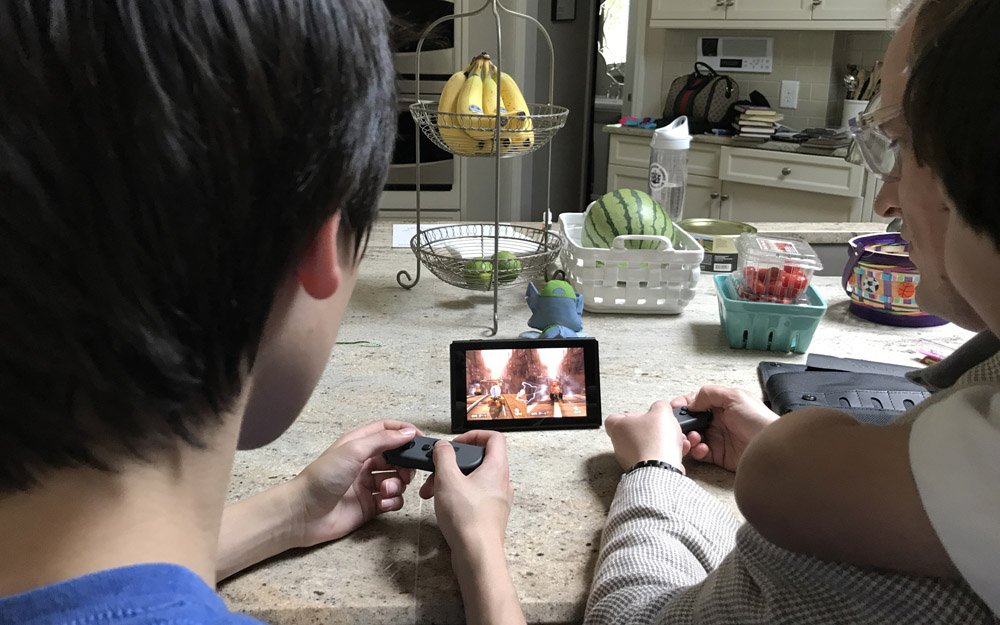 The impromptu multiplayer setup isn't without its minor snags, of course. The Joycons don't slide as freely off the system's core as Nintendo would like them to, and the wrist strap attachments are always a hassle to attach and remove. And even with the attachments, the Joycons are much too cramped for extended play sessions for all but the youngest of players. On top of that, the Switch's screen itself seems pretty tiny when you're playing at a distance greater than holding the screen directly in front of your face; arguments nearly broke out every time one of the kids tried to surreptitiously nudge the screen closer to them. But after the initial two minutes of setup (and once I laid down the law about placing the screen in between players, to be fair to everyone), MK8D remained in active use for the rest of the night. We started off with standard races, but once the younger kids with the shorter attention spans wandered off to find other amusements, the two older teens switched over to battle mode for the remainder of the evening.

It's not difficult to imagine extending this use case to dozens of other games on Switch. Instant-match fighting games? Infuriating New Super Mario Switch multiplayer sessions? Cooperative Contra III on Virtual Console? Sign me up, for all the above.

Due to its necessary technological restrictions, handheld gaming has always felt like a format that lags a generation behind the cutting edge of console play. Switch doesn't change that — while Microsoft and Sony are delving into 4K visuals in an attempt to remain competitive with personal computers, Nintendo's new system doesn't even output 1080p on a consistent basis. In handheld mode, though, MK8D's small-screen 720p resolution looks sharper than the game did on Wii U. And above all, MK8D delivers an experience you can enjoy anywhere, anytime, with anyone. For perhaps the first time, handheld gaming (even if the company's marketing doesn't refer to it necessarily as such) doesn't feel so far behind consoles. Switch may not have the horsepower of PS4 Pro, but it breaks handheld gaming away from the one-to-one system-to-player ratio that's always been one of the format's greatest drawbacks and allows for an impromptu session of console-caliber gaming with almost no friction. 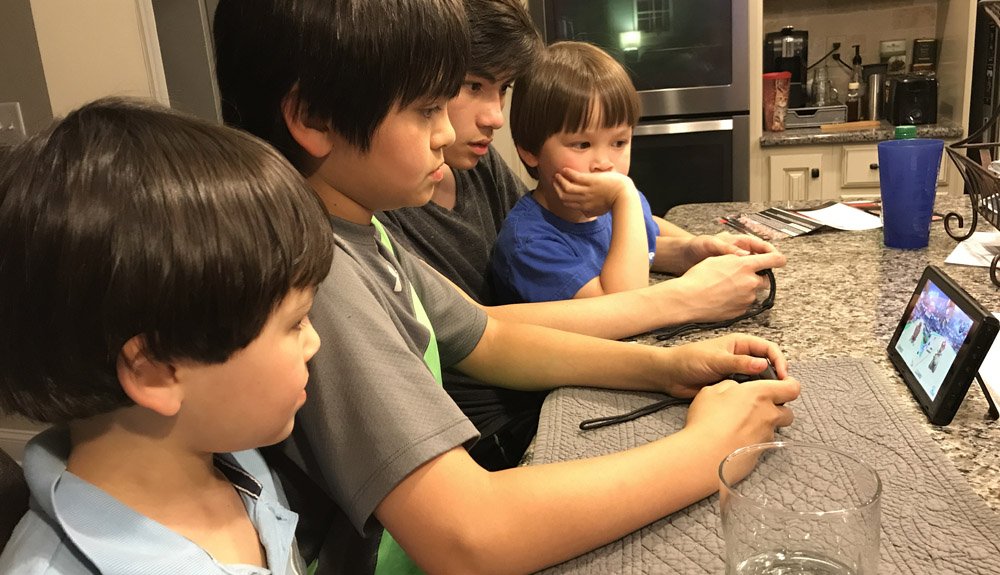 Granted, this potential has always been there, ever since Nintendo first showed off the Switch. It's just that MK8D is the first release to feel like it truly makes good on it. Zelda may have been the system-seller, but MK8D demonstrates why Switch might actually live up to all those Wii-sized sales aspirations and predictions. If the kids' reactions to my weekend play sessions are any indication, a head-to-head countertop Mario Kart race is the kind of game experience that makes true believers out of skeptics. As a game, Mario Kart 8 Deluxe perfects a long-running series; as an experience, it defines a new standard for how multiplayer portable games should work.

Not bad for warmed-over material.