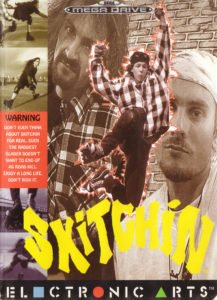 (This post will be even better if you load up this here YouTube video and listen to the contents within while reading. Seriously, do it. In the words of Dr. Evil, throw me a frickin' bone here.)

With news about old machines being rather slow today -- as is often the case -- it's perhaps time for another recommendation post.  Skitchin' is one of those games on the Mega Drive that can be somewhat unfairly maligned, perhaps due to it being the absolute single most '90s game in existence - the entire decade runs through it. You've got the crunchy guitar soundtrack, the digitised pictures of folks with asymmetrical flattops and other ridiculous hairstyles, the graffiti aesthetics and the very art of skitching itself - hitching a ride by hanging on to the back of a car while also on skates or rollerblades. Skitching's a real act and can be pretty damn dangerous, meaning that like any true '90s video game, Skitchin' also generated tons of controversy as people worried about their kids copying what they saw on the screen. Nothing even comes close to being as '90s as Skitchin'.

What’s often forgotten about the game amidst the entire summation of the whole Generation X period though, is how great Skitchin’ actually is. It’s an offshoot of the much more popular Road Rash series, with the same focus on beating your rivals — literally and figuratively — to first place, but the gameplay has a lot more features than just on the road violence. The art of skitching itself is so fun to do in game, as you quickly try to switch from the back of one car to the next, launching yourself from the side each time…it’s nuts and normally goes badly when you don’t quite make it to the car in front, but it’s so fast — it helps that Skitchin’ runs really smoothly, a lot better than Road Rash I and II does.

Skitchin' is also a very active racer -- again, more so than Road Rash where it often seems like you just move from one biker to the next. Every other skitcher is trying to do the same thing you are, and it's quite a difficult act -- meaning that it's not uncommon to watch as your rivals get sent flying everywhere on a busy road as a car slams into the back of them.  Hazards on the road are plentiful - cars aside there's oil slicks, the odd barricade, and plenty of ramps, which can kinda surprise you. Ramps offer a chance to show off by doing a trick too, as long as you stick the landing...you can even do this off of any skater who happens to be lying in the road. Imagine flying off of a rival, doing a star jump and sticking the landing as the crowd admire you -- that's pretty freaking gnarly. Of course, unexpected jumps like that often result in you landing in a crumpled bone heap and then getting knocked for six by an incoming vehicle. Skitchin' demands serious engagement, all the time.

It was often hard for people to take Skitchin' seriously at the time and it obviously still is in many ways -- it couldn't hammer home the time it's from any more than it does. But then virtually everything about the game actually works -- the risk/reward gameplay that it revels in, the technical craft, even that music -- which is one of the few times that anyone, especially in a Western game, has made electric guitar on a Mega Drive game sound really good. Only a few years after Skitchin', extreme sports games would be absolutely everywhere as the craze for skateboarding gathered momentum, and in that context Skitchin' is far from out of place. It's taken me quite some time to take the game seriously -- you'll probably be the same -- but I've come to think that it's better than any of the classic and better known Road Rash titles. But whatever, enough beeswax from me -- if you've got the cheddar, then peace on out to the local Atari store, and gank yourself a copy. It's the bomb-diggity, no diggity. We outta here.