Wolfenstein II: The New Colossus and the continued relevance of B.J Blazkowicz 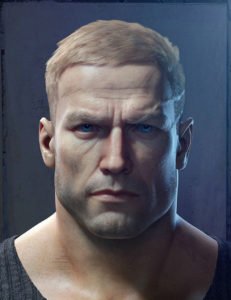 Wolfenstein is an odd series in many ways -- it's had more reboots than Spider-Man, it's always dealt with Nazis doing futuristic and/or supernatural-type stuff, Id gave their blessing to a Christian game studio to redo a SNES version of the game around Noah's Ark, and it has a quite awesomely named hero -- a grizzled, cropped-blonde hair veteran by the name of B.J. Blazkowicz -- he's escaped castles, cheated death and been to the moon and back, just so he can shoot Nazis. Lord only knows what will happen to him in the next installment -- Wolfenstein II: The New Colossus was announced at E3 by Bethesda for release in October 2017. It's been a long journey since the first game, Wolfenstein 3D, helped to popularize the genre of first-person shooters in general.

After that iconic first game (and Spear of Destiny, its retail sequel of sorts), Wolfenstein has reappeared intermittently with varying degrees of success -- after the even bigger success of DOOM, original developers id Software focused on that and have never developed a Wolfie game since. For most of the 2000's, that job was left to Raven Software, who made the other big-selling game in the franchise - 2001's Return to Castle Wolfenstein. A very good and advanced FPS for the time, it was also definitely the best game in the series from a multiplayer perspective, becoming very popular online. However, Raven lost their grip on the franchise with 2009's reboot, simply titled Wolfenstein -- while the game has its fans, it underperformed critically and commercially and sadly is not available to buy new today. The game unfortunately got lost in the shuffle somewhat with a great deal of other FPS's out at around the same time, and the status of ol' Blazkowicz looked in jeopardy.

Things did change however, when publishers Activision decided to sell the IP off to Bethesda -- who would then commission Swedish studio MachineGames to work on Wolfenstein: The New Order, which arrived in 2014. The New Order stood out at the time for taking things almost all the way back to 2001 with its gameplay -- as an FPS it has quite old-school sensibilities in level design, and in shooting. It's also quite the challenge -- when released, it was one of the toughest FPS's to come out in a while. The game wasn't a commercial smash, but it's always held its appeal -- critics who weren't expecting a whole lot from it were pleasantly surprised, and its come to be regarded very well indeed.

And so, the sleeper success of The New Order sets up The New Colossus as quite easily the most hyped and highest profile release in the franchise for over 15 years -- it's now up to them to see if they can deliver a slam dunk. Fortunately after all the many reboots and different focuses that the series has undergone through the years, it seems as though everyone finally knows exactly what B.J. Blazkowicz is really good at -- shooting Nazis, no matter what sort of contraption they come up with. If the new game keeps that in mind, then greatness will surely follow.