In what is becoming a regular occurence, I'd like to preface this week's roundup by mentioning a Japanese re-release that currently has no signs of being localized: GrimGrimoire OnceMore, a PS4/Switch remake of Vanillaware's PS2 side-view RTS that uses high-definition visual assets and massively reconfigures the gameplay into something that contemporary players might recognize as game-like. 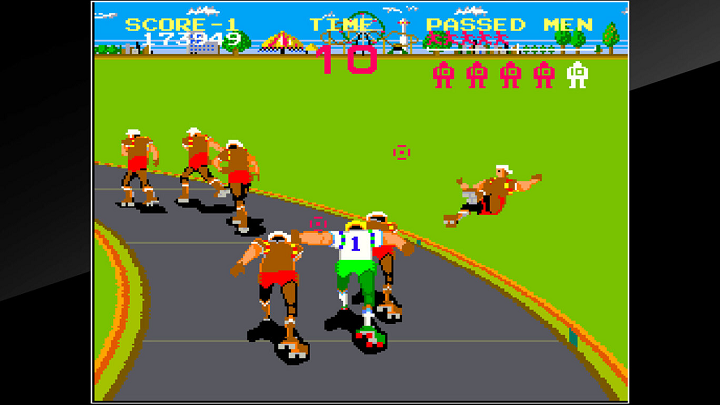 What's this? A pseudo-3D racing/action game themed around the '80s roller derby fad, originally developed by Alice and distributed in arcades by Nichibutsu in 1984. Stages alternate between solo time trials through obstacle-laded courses and races against rival teams, during which the player is tasked with passing a certain number of rival players within the allotted time; players can not only jump to avoid obstacles but also throw punches left and right to incapacitate rival skaters.

Why should I care? You're suddenly awash with thirty-year-old memories of Skitchin', or you just want to bask in another early-'80s technical showcase from Nichibutsu (scaling sprites! all-too-aggressive line-scrolling road! barely-legible sampled speech!).

Useless fact: Roller Jammer might be the first game reissued via Arcade Archives that was never officially released in Japan — it was shown at Japanese trade shows under the name Fight of Exciter but ultimately only saw release in the US.

What's this? A successor to Sega Toys' popular Astro City Mini desktop arcade cabinet, now equipped with a vertically-oriented, true 4:3 screen and focused exclusively on vertically-aligned games, both from Sega and various other developers. In addition to features from the original Mini — support for both the embedded screen and 720p HDMI out, support for external official control pads/sticks, screen filter settings, save states, etc — the Mini V adds per-game dip-switch settings, a friendlier quick-save/load setting using unused buttons, additional rotation settings for the HDMI-out mode, a more robust attract mode and new menu music from veteran Sega composers Hiroshi "Hiro." Kawaguchi and Takenobu Mitsuyoshi, as well as specialized per-game control configs/layouts that conform to those used at the popular Japanese arcade Mikado.

Why should I care? Even the average classic arcade game enthusiast probably won't care, and that's fine: the Mini V is very clearly designed for and targeted at shooting game fanatics, and the game lineup should be commended for assembling a ton of classics from a wide variety of parties and for offering first-ever reissues of quite a few heavily-demanded games that have never left arcades. As for whether the Mini V can adequately run these games to the standards these fans expect... I mean, it's going to look cute on your desk, so that's somethin'.

What's this? A cutesy arcade action/platformer with an enemy-possession gimmick, originally distributed in arcades by Jaleco in 1991 and popularized via its more well-known Game Boy adaptation in 1992; in addition to Ratalaika's usual suite of features (button remapping, rewind, screen settings/shaders), this version allows you to play either the international or Japanese (Phantasm) ROMs, and also offers either a pre-configured experience or one that allows the player to freely toggle the arcade game's dipswitches.

Why should I care? You want to try the original version of a cult handheld game, or you're someone who heard the "guy murdered by the mob wreaks vengeance from the afterlife" conceit and presumed the game was not nearly as cartoony as it actually is. (That said, you may want to wait for a patch or two.)

Helpful tip: In case you missed it, Retro-Bit's selling a glow-in-the-dark cartridge reissue of the Game Boy version.

What's this? A remaster of a 2009 metroidvania set in the Touhou universe, originally developed by doujin circle Frontier Aja exclusively for PC; in addition to full Japanese voice acting and multi-language text, this version adds (mostly filtered) higher-resolution graphics, an additional summon, an "extra easy" mode and in-game galleries for music, art and more.

Why should I care? In its day, the original Komajou Densetsu was one of the few Touhou-adjacent games that found any penetration outside of the Touhou scene, and while both the novelty and execution of such an overt Symphony of the Night homage has been surpassed over the last decade, I'd say this game still compares favorably to some of the shorter-form metroidvanias around today. (Yes, there are bullet hell elements present during the boss fights; no, I don't think the average action game player will have a ton of trouble with them; no, I may not be a great judge of what people do or don't have trouble with.)

Helpful tip: Frontier Aja made two of these games, and the second (and arguably better) one is the Rondo of Blood to this game's Symphony of the Night, so let's hope it's in the pipeline as well.

What're these? Digital versions of Strictly Limited Games' two long-delayed collector's-edition Turrican compilations, distinct from the more widely-released Turrican Flashback and initially claimed to be physical-only; in addition to the differing game lineups, these Anthology releases offer an enhanced feature suite including improved rewind, button configs and wallpapers, a multitude of alternate soundtrack options and a dynamic map system that allows you to observe and even play an entire stage in a zoomed-out, full-widescreen perspective.

Why should I care? Turrican is one of a small handful of European microcomputer-borne action game series that was able to successfully bridge the gap to the home console audience, and while it's a shame that the three(!) existing collections have managed to present the series in the most unnecessarily confusing and expensive manner possible, it is nice that these Anthology collections are no longer the sole domain of collectors, as the expanded feature suite (at least, the parts that function correctly) is genuinely quite impressive.

Helpful tip: I gripe about this every time these collections come up and I won't hesitate to do it again: none of these three(!!) collections contain the original Commodore 64 versions of Turrican 1 & 2, developed almost solely by series creator Manfred Trenz, nor do they include Trenz' PAL-only Super Turrican for NES (based on the C64 originals, not the SNES game). 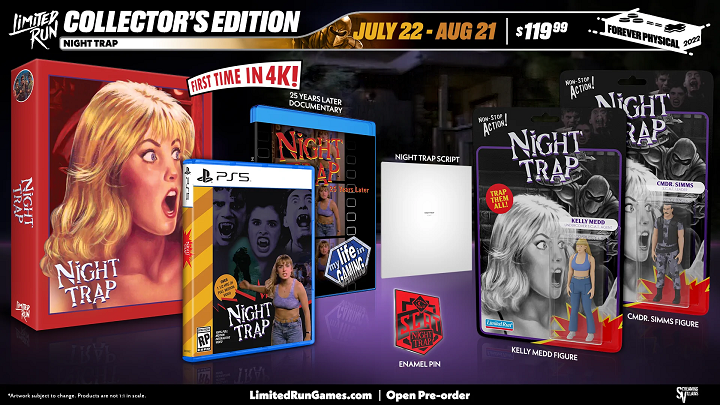 Do we have no choice but to stop making new video game consoles, lest LRG find one more excuse to reissue Night Trap?